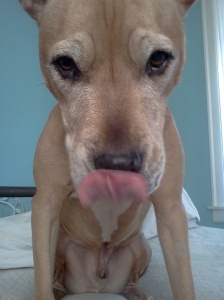 I love this quote:

It’s the epigraph of the book I just read by Gordon Grice called The Book of Deadly Animals.  I’m working on a chapter about survival — the ways we find to keep our physical and emotional selves intact.  At least I think that’s what it’s about.  When I start a chapter I don’t know exactly where it’s going to wind up. I have a murmuring in my head — words, images, fragments of stories.  I have to investigate this murmuring and see what kinds of connections develop.  Thinking about survival led me to predator and prey.  Hence the rather bloody research.

The idea for this chapter started with me remembering the way I thought about animals when I was a kid — a certain look my uncle’s dog had in his eye that suggested to me a different way of knowing the world.  Then I started wondering about the ways we are animal — the ways we hide and protect, fight and defend, nest and mark our territories, the ways we communicate with one another outside of language.

The chapter is also about being a kid and becoming aware that although the world is home to abundant beauty, it can also be brutal.  It’s about how I struggled (and struggle) with that awareness.  So I’m reading about predators and prey, watching old episodes of Mutual of Omaha’s Wild Kingdom on youtube and writing about tooth and claw and hunger and flight.  I think writing for me sometimes is an effort to articulate things I know but don’t yet know that I know.  So I like that quote about philosophy somehow being an attempt to recover or uncover a wild truth, to know something about ourselves we didn’t know we knew. And I like that the key to that truth might lie in the gaze of an animal.