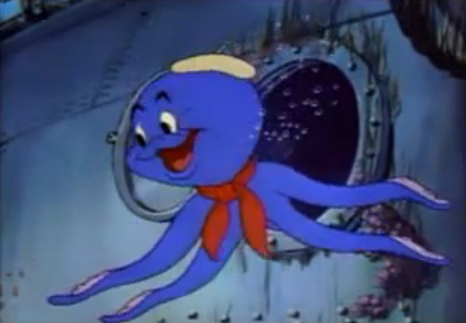 I’m working on a chapter that’s based on a monologue I performed a few years ago at Live Bait Theater in Chicago. Every summer, my friend Tekki, the artistic director of Tellin’ Tales Theatre, curates an evening of solo performance based on a theme. That particular year she titled the show “Potholes on the Path to Enlightenment,” and she asked us to write about an epiphany. That’s not really so hard, I thought: almost every story is about some kind of discovery – some little or big a ha! But she wanted it to be something pretty major, something that could, like, change your life. When I started working on the piece, I became a little obsessed with octopuses. For weeks, I read and wrote about octopuses. (By the way, octopuses is the correct plural – either that or octopodes. Octopi is frowned on by most references because the –pus derives from Greek and not Latin.) I wrote about an octopus I remembered from Sesame Street, which I watched as a kid. A man’s voice said, “And now, the octopus,” then this octopus swam around a tank for a minute, and that was it. Anyway, I was trying to write this piece about epiphany; I thought I should be writing about God, transcendence, the search for meaning, and I kept coming back to the octopus.

Figuring out what my brain is onto is one of my favorite parts of writing. The work is making clear the dot-to-dot of connections I’ve made in my head and finding a way to take the reader along on the journey. I don’t want to make it all too obvious or the reading won’t be any fun. But I can’t make it too obscure either – I can’t lead the reader into the woods and leave them with no trail to find their way back. I want the reader to make the discoveries I made in the living and the writing of the story – in this piece, for example, how the search for God and meaning relates to octopuses (also Clash of the Titans and Esther Williams).

An epiphany is an insight that comes about because of something ordinary. I probably watched my octopus on Sesame Street every day. It was ordinary. But the octopus itself, all rippling flesh and unfurling suckers was extraordinary. The octopus was an epiphany billowing across our black and white TV.  It said, wake up! Look at what’s out here in the world. Look and look and look.

Tell me, friends. What is it that makes you wake up and look?